Dear Internal Combustion Engine: Our romance is on the rocks 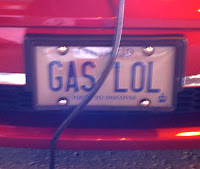 Dear Mr. Internal Combustion Engine (ICE) - did you really think our romance could last? Did you notice it's $1.36/L for gas in Toronto now? As if gas was ever a swell price to begin with. No, Mr. ICE, you’ll have to do better to win back our love.

And the thing is, you’ve got competition.  Last Sunday we attended the 2012 Electric Vehicle Fest at Toronto’s Evergreen Brickworks and our hearts were seriously swayed.

We liked a dark red 2011 Nissan Leaf, nicknamed “BEV” for Battery Electric Vehicle. Owner Renny adores BEV’s generous tush and sang her praises like a love-struck schoolboy. She even talks to him as he drives, letting him know how efficiently he’s driving. Her dashboard sprouts trees to encourage him. When Renny turns BEV on, she welcomes him into the driver’s seat with his choice of sounds. Best of all, she only costs about $1/day to run. And even though BEV cost $49,000 (minus a government rebate of $8,500), Renny reckons he will have paid the difference between what he paid for BEV and a similar ICE vehicle in three short years. That’s great news, since he has a daily commute of 60k. Renny loves to advertise how much he’s saving on gas – BEV’s licence plate reads GAS LOL. We couldn’t have said it better ourselves.

Renny doesn’t miss much about the Internal Combustion Engine. He says BEV rockets up to speed with no sweat, since electric vehicles all have torque at the low end. And he’s got a handy iPhone app that not only lets him know how much battery power is left, it allows him to cool or warm BEV’s interior remotely. Now THAT's magical.

Mitsubishi’s adorable 2011 i-MiEV (Mitsubishi Innovative Electric Vehicle) isn’t quite as fancy, but that’s the whole point. It gets the gasoline equivalent of 248 mpg, and owner Michael estimates it costs him about $1.25/150 k to operate. He had been crushing on the i-MiEV since he saw it at the Green Living show – it set him back some $30,000, after which he received an $8,200 government rebate.

Another i-MiEV owner, David, points out that the Mitsu dash was deliberately designed to look more like you, Mr. ICE, with a speedo, fuel gauge and heater, so that we won’t miss you that much. (As if!) The i-MiEV has no touch screens or butterflies on the dash, just a gauge that shows if you’re driving in eco mode. The Mitsu’s range is about 155 k’s – its battery is only 16 kwh, compared to the Nissan’s 24 kwh, which makes it lighter. Note that Mitsu makes its own battery! 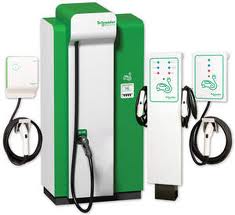 All of which makes us wonder, where are all the charging stations? After all, if we’re going to head out on the road in an EV, we’d like to know where we can fill up. Here’s where it gets a little confusing. There are some websites like plugshare.com which show charging stations everywhere from public stations to private residences in North America. But how up-to-date is it?

Maybe things were different in 1916 – that’s when the Rauch and Lang electric carriage was built. Ladies and gents had separate doors, the engine started with a crank, and a tiller controlled the steering. Another lever controlled the speed. Brakes were a button on the floor, and a bell in the floor shooed horses off the roadway.

It’s practically civilized. Which – is more than I can say for you, Mr. Gas Guzzling ICE. Unless you clean up your act … our romance may be over.
Posted by Krystyna Lagowski at 1:58 PM