The little east German car that could ... 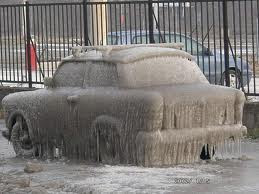 In some ways, the car in this photo has been frozen in time. The proud Trabant was once one of the few means of personal vehicular transportation available to the proletariat in Eastern Europe under Communism. Imagine, spending years on a waiting list for a car, handing over your hard-earned deutschmarks, rubles or zloty – and this is what you get. A two-stroke, smoke spewing, whiny and rattling Trabant. And the very definition of what the French call “jolie laid”, or “pretty ugly.”

When someone starts to weiner on about German engineered cars, I like to bring up the Trabant. Those resourceful east German engineers were probably given a bucket of potatoes and told to design a car. And they managed to hook up a lawnmower engine to a lightweight body that could schlepp four adults around the Eastern Bloc. Never mind the capricious powertrain, the noxious exhaust and Duroplast body – essentially, a paper compound. Over 3 million of these were sold from 1957 to 1991.

And to those exotic car aficionados who like to brag about their car being hand-made, I like to point out that the Trabant was also lovingly made by hand. All it took was a mullet and a mallet to get the job done.

In the 90s, the collapse of the Berlin wall and the closing of the Trabant factory made more than a few people nostalgic for the little bug-eyed denizen of the Deutsche Demokratische Republik (DDR), with folks bragging about how Männer aus Stal fahren Autos aus Pappe (men made of steel drive cars made of paper).

But the Trabant is having the last laugh. The polluting punchline of the East German auto industry made its debut at the 2009 Frankfurt auto show as – an electric vehicle. Since then, the automakers have been looking for investors so the electric Trabant can hit the showrooms in 2012. I would guestimate their main drawback has been the price – almost $30,000 for a Trabant?

Posted by Krystyna Lagowski at 12:15 PM