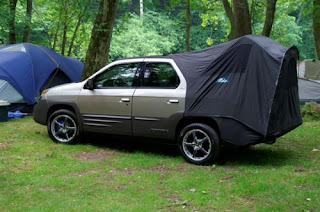 Last week, when the Insurance Bureau of Canada released its list of the top ten stolen vehicles in Canada for 2010, one thing was clear – Canadian car thieves plied their ruinous trade armed with dangerously bad taste and a clear disdain for the environment.

Take the car at the top of the list – the 2009 Toyota Venza. At first glance, its main appeal would be the freakishly oversize 19” wheels. This is not a pretty car. It is not a sexy car. It is just plain fugly. But according to an anonymous automotive locksmith, in its first year of production, the security system had a loophole. And so anyone can break into it in only 24 seconds. Another reason not to buy a car in its first production year.

Moving down to #2 and #3, we have the more predictable 1999 and 2000 Honda Civic SiR. Not only are these popular with the young tuner crowd, but they can apparently be broken into with a simple butter knife.

Next, #4, #5, #6 and #7 – the 06 Ford 350 pickup 4WD, 02 Cadillac Escalade EXT 4-door AWD , 06 Chevy Trailblazer SS 4-door 4WD, and the 07 Ford 350 pickup 4WD. It’s unlikely any of these will haul anything grittier than Gucci luggage. They will, however, spend a lot of time at the gas station, where the cashier may or may not be impressed. That’s about the best reason for having one. Those poor cashiers get bored.

But it’s #8 on this list that is truly mystifying – the 2001 Pontiac Aztek. Although it can fold out into a handy dandy tent, the hideous Aztek (nicknamed Asstek) demonstrates that Detroit does ugly like no one else. I even emailed an Aztek owners’ association to ask them what they thought of this dubious achievement, and no one got back to me. Perhaps they were all out celebrating? Or thinking of ways to entice car thieves, like leaving the engine running and a six-pack of brewsky on the front seat.

Finally, #9 and #10, the dependable 98 and 99 Acura Integra.These cars are hot in many ways, unfortunately. And the butter knife that breaks into a Civic SiR? It will apparently break into these as well.
Posted by Krystyna Lagowski at 11:52 AM