La Contessa gets bitten by a Bug 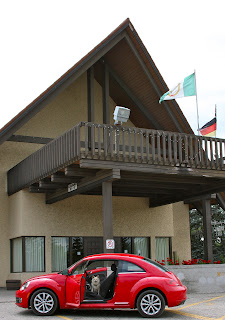 There were certain members of La Contessa’s family who swore never to ride in a Volkswagen because they considered it Hitler’s little car. But from Hitler to the hippies who made it a counter-culture icon, the Beetle has always been one of the more controversial and therefore beloved of my vehicles.

When we heard the new 2012 Beetle redesign was out, ach du lieber! we were thrilled. We loved the original reincarnation, especially since it was immediately dubbed a “chick car.” Why this is a marketing kiss of death, we’ll never understand. The 2012 version is truer to the original Beetle, with a less rounded, flatter silhouette and sitting much lower. In fact, it’s more butch and sporty than the first reincarnation, although the original Beetle never was. Our model was aptly named Tornado Red, and indeed, with 170 hp - yes, I checked under the hood! it tornadoed rather than beetled down the highway. 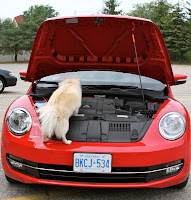 We decided to take a jaunt to Kitchener, which as you know was once named Berlin, with a hefty number of Germanic people and influences. As soon as we arrived at the Concordia Club and saw the German flag waving at us, we thought of  Cousin Ute, who was born in the German town of Wolfsberg, home to the massive Volkswagen plant. She lived with the groundskeeper of the castle that was appropriated from the Earl of Schulenberg by Hitler to create this town. It’s rumoured that the groundskeeper is a distant relative of the Earl, but who knows?

Schätzchen Ute is a font of knowledge about all things VW, and despite being a glamorous and modern Berliner now, always rides in a Beetle. She told me that it wasn’t necessarily Ferdinand Porsche who designed the Beetle, but possibly a Czech designer named Hans Ludwinka with whom Porsche apprenticed – or even a Jewish engineer named Josef Ganz. Really, Hitler wasn’t much of a car guy – he didn’t even have a driver’s licence.


Furthermore, plans for the Beetle to go into mass production were somewhat sidetracked by Hitler’s invasion of Poland. The Beetle as we came to know it owes much to to a little known British solider, Major Ivan Hirst, who stumbled across a couple of prototypes in the Wolfsberg factory – which was due to be scrapped by the victorious Allies and used for war reparations. Hirst realized the factory could be better utilized for producing cars for the British army and the assembly lines started beetling along.

Isn’t Ute a clever girl? I thought of her as I examined the lovely red Beetle, with its black interior and snazzy red accents. The dash was smaller, and can no longer accommodate a game of solitaire, gott sei dank! But we missed the bud vase, a fun, playful touch so absent in today’s car designs. The tiny glove compartment must have been lifted out of an original Beetle, so teeny it could barely accommodate my muzzle. Yet, the trunk was roomy enough to fit several cases of beer and wurst.

We had a glorious time with the 2012 Beetle, and hope people realize the monicker “chick car” is actually a lofty compliment – one that translates into style, affordability, and all the power you need. And that truly is wunderbar!

Posted by Krystyna Lagowski at 11:22 AM