La Contessa and the Ford Focus 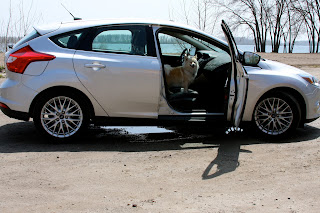 Mon dieu, the things they expect from a simple chien. Just because I have a pedigree as lofty as the tour Eiffel, I am an expert in all things mechanical?

Let me introduce myself. I am La Contessa, a very rare Princess Johanna's Court Dog. In the old country, I am indulged and flattered for my blue-blooded link to the crowned heads of yore. But on this common continent, I must work like, well, a dog, to earn my keep.

And so it is that I have been dubbed the Designated Dog, and schlepped around in a 2012 Ford Focus SEL for a full week. As I was thrust into the comfy leather seat, I was mesmerized by the centre control panel – it could rival the cockpit of La Concorde, where my cousin Olga often criss-crossed the pond. 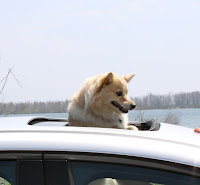 Such a luxe European ride, it took me back to the old days in Gstaad. I was almost lulled into a sleep, when – ach du lieber! Such bumps! Was I in the backlanes of the Red District? No, it was merely Dufferin Street, which was recently voted by the CAA as one of the worst roads in Canada. We slalomed our way around the potholes, rather than schussing through.

As luck would have it, the torture test continued. There are cobblestone streets in Amsterdam that are smoother than Lawrence Avenue, another title-holder in the CAA worst roads listing. I feared we would disappear into one of the potholes, but our luck held. Actually, it was not so much luck as the well-heeled chassis and suspension on the Focus, which has been tested for its durability on a Lommel Proving Ground in Belgium and Michigan Proving Ground in the U.S. Anyone who has driven in Brussels (dear cousin Sasha and I romped there regularly) can attest to the brutality of the roads.

Then it was on to my favourite park at Cherry Beach. Here I could examine the Focus from every angle, as was my job. A clever set of wheels, it was, stylish and roomy – I could accommodate a whole litter of puppies in the hatch! But mamma mia, the beeping back-up system hurt my sensitive ears – they really must change the tonality to something less aurally invasive.

And then - какого хрена! Where was the gas cap? I sniffed high and low but couldn’t find a knob or switch for the life of me. But my aristocratic snout (which can discern a fine merlot from 100 metres) led me to success! There it was, cunningly hidden behind a rear quarter panel.  Bravo, Ford engineers, you almost had La Contessa.

A light rain fell on our way home, but the rain sensing wipers – moving inwardly – kept our windscreen clean. It made me misty for cousin Manuel’s Benz, which featured the same wiper pas de deux.

It’s late now. The Focus is gone and I need to count my names. I remember there being 16, but I’m not sure about the last one. Now that I’m in America, perhaps I should cut down?
Posted by Krystyna Lagowski at 3:21 PM