La Contessa gets her Citroen on 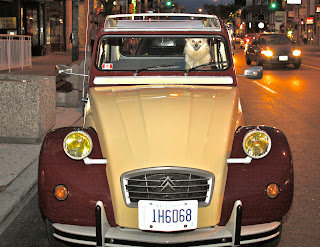 At dusk, the last glimpse of day before nightfall, life truly begins for bon vivants such as La Contessa. For it is then that the Citroens come out to play.

How delighted we were to come across an impromptu meeting of the Citroen Autoclub Canada and their remarkable cars. Ah, the memories! Has there ever been a car as enchanting and practical as the Deux Chevaux? As a young pup in Montmartre, it was my daily driver. If cars could talk, that set of wheels could spill volumes.

Peering out of the flip-up window, my whiskers quivered at the marvel of design and engineering at my paws. From the outside, the Bauhaus-inspired curves appear at once utilitarian and stylish. Yet, they conceal an interior which can accommodate a French farmer with a top hat, on his way to market with a dozen eggs on his lap, driving across a freshly ploughed field. Oh, and it can also accommodate a Princess Johanna's Court Dog and her entourage after a wicked afternoon on the Champs d'Elysee ...

The 2CV is minimalism at its most chic, with a thousand other innovations to make it affordable, fuel efficient and easy to maintain. What else would you expect from the country that gave us moving pictures, the little black dress and the bikini?!

Later, we hung out with the Citroen Autoclub, who own a fleet of the French lovelies between them. These fellows know their vehicles, and we swapped stories late into the night. The adventures we have had with our beloved Citroens! Then there is Cousin Madeleine, who makes her deliveries in a pastel blue Fourgonette in Aix en Provence. I have been sworn to secrecy about her precious cargo and what goes on after the drop-offs. Mon dieux, others might think her quite bohemian but Madeleine is simply an artiste, mais oui? 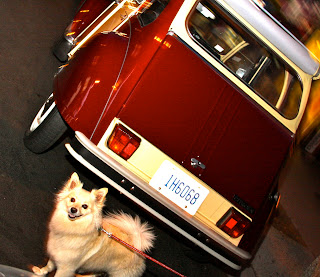 Of course Citroen is a beloved French brand, and no less than General Charles de Gaulle himself credited a DS 19  for saving his life - when would-be assassins killed two bodyguards and shot out the tires, the chauffeur was able to drive to safety, thanks to the ingenious DS hydropneumatic suspension system. These cars were even able to drive on three wheels!

And so I was not surprised that the latest French president, Francoise Holland, recently chose the Citroen DS5 Hybrid 4 to launch his term. He follows in the footsteps of predecessors Georges Pompidou, who rode in the marvellous Citroen SM, which was also used in parades by Giscard d'Estaing, Mitterand and Chirac. In 1995, Chirac opted for the CX Prestige and then later, the C6.

For centuries, the French have led the way in living and loving with style and grace. Let others be subverted and seduced by noisy engines that can devour distance in minutes... and for what? How bourgeois and arriviste. La Contessa knows that time is precious, but a grand entrance is worth its weight in horsepower.

Posted by Krystyna Lagowski at 8:22 PM