Another day, another Ford Focus 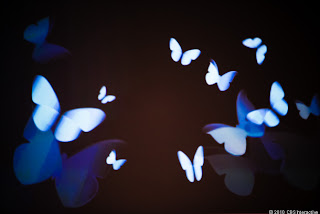 When Ford invited us to be among the first to drive an electric Ford Focus, how could we resist? Especially when it was so hot on the heels of our adventures with a gas-powered Focus. We arrived a little late, having experienced spectacle problems – the famous cat’s eye specs were cobbled together with a safety pin.

These ride ‘n’ drives are always a lovely way to spend an afternoon, even if there were no dogs allowed – even La Contessa. As expected, the conference room at the Allstream Centre was full of green products and cues, like the soy foam and recyclables used in making hybrid and electric vehicles. Lunch was saladicious and healthy, with some decadent brownies to keep us from feeling too smug. 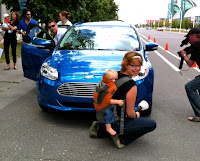 But it was the guests at the event that demonstrated how the auto world is changing. Instead of just a gang of auto writers talking about gear ratios, chain drives and paddle shifters, there were mommy bloggers, social media mavens, and digital dynamos. There was more discussion about tweeting than there was about torque. And - there were even a couple of incredibly well-behaved babies bundled into knapsacks!

Following a power point presentation about Ford’s green philosophy, we were escorted down to the cars. Each car came with a driving instructor, to explain the controls and functions. And good heavens, there was lots of ‘splaining necessary!

My charming instructor was named Jeff, and we took along two passengers. To begin with, the electric Focus was darn quiet. When you press the ignition, you can’t even tell it’s on – the ignition light signals that the car is indeed powered up and ready to go. Great for spying on people and sneaking up on them, and maybe even reducing some noise pollution.  Bicyclists, however, may not appreciate this.

It was hard to believe the seats were made of recycled water bottles – while we have sat on water bottles before, it was mostly by accident and quite uncomfortable. But this time, our tush was quite happy. Jeff showed us where a butterfly would appear on the dash if we drove economically – that is, no sudden acceleration or braking. Try as we might, no butterfly appeared. Oh, well. Still, we like this trend with green cars – why not incorporate it into gas-powered vehicles? Getting drivers to operate more fuel-efficiently shouldn’t be limited to electric vehicles.

And at the end of our drive, we were tickled to be interviewed by CHCH TV. And they didn’t seem to care that our glasses were being held together with a safety pin. 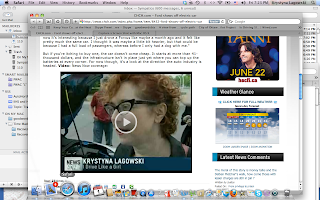 Posted by Krystyna Lagowski at 12:40 PM