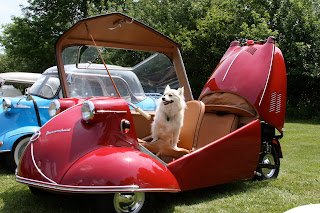 Nothing puts a happy grin on La Contessa’s snout faster than a microcar, and when you have a lush green lawn full of micros, well! I am in microcar ecstasy. This is exactly what happened last weekend at Ralph and Wendy Hough’s MicroNorth, where the micros came from near and far.  Every year, Ralph and Wendy graciously open up their beautiful home in Coldwater, Ontario, to microcar enthusiasts from all over North America. The tiny cars dotted the expansive lawn like bright shiny gems on wheels – che belle!

Most of these were vintage vehicles, highly prized collector’s items, and their owners have coddled them like pedigreed pups. A micro, as you know, is any vehicle with an engine under 500 cc. They were wildly popular in the 1950s, when gas was scarce. Many of the little cars had only three wheels, which in England and Germany, meant their owners paid half the road tax. Ingenious, mais non?

Here in North America, we must wait for invitations to events like MicroNorth to enjoy these diminutive darlings. Ralph Hough himself, a strapping six-foot former policeman, has a collection of Messerschmitts, many of which were displayed on the lawn. He got his extremely rare 1955 KR175 red Schmitt in Montreal, where its original owner had brought it from England – the poor car was literally a basket case! Only 10,000 of the KR175 were built between 1953 and 1955, so parts were scarce. Of course Ralph sleuthed out the necessary parts, including the factory original option “suitcase,” custom built to fit in the tiny luggage space.

We loved the pale yellow 1957 Isetta, so much like dear cousin Rosalia’s, who keeps company with the town doctor in the southern Italian town of Campobasso. Oh, the hot summers we enjoyed, travelling along the Biferno river in the mountains. This Isetta even had a wicker basket on the back like Rosalia’s, perfect for picnics. What that clever girl, or cucciune as the doctor would say, could do with a little prosciutto and provolone! Like all Isettas, this one had a one cylinder 300 cc Hemi engine – yes, that’s right, a Hemi. Raise your hand if you know that any engine with a hemispherical cylinder head is called a Hemi. The Isetta story is one of my favourites – they were originally manufactured by an Italian company called Iso, which made refrigerators. Isetta simply means “little Iso.” Sitting in the little car, my nose thrilled to the scent of vintage leather and two-stroke – and I could almost smell the prosciutto…

Then it was on to a smart red 1957 Berkeley convertible, one of only 1,281 made in Biggleswade, Bedforshire. Owner Jeff had been working on it for over 13 years, with astounding results. The fibreglass shell had held up remarkably well! Who knows, perhaps La Contessa was sitting in the same model that famed racecar driver Stirling Moss had once championed at Goodwood?

And then, complete shock. A real, live beige 1981 Syrena from Poland. Owner Slawek had brought it over five years ago. With its 850 cc engine, it perhaps exceeded the microcar standards, but I didn’t care. I have not seen a Syrena since the days in Krakow, visiting with cousin Agnieszka. We would smuggle contraband onto the black market and then feast on forbidden delicacies like Baltic caviar? Smacznego! Who would suspect two pretty tail-wagging blondes? 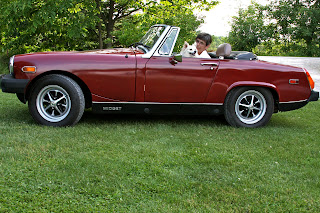 But it was Kate and her thoroughly gorgeous red 1980 MGB that won our hearts. She graciously invited us to tour the scenic roads around Coldwater in the microcar convoy, and pointed out sights like an osprey nest. Long, lean and tanned, Kate was a force of nature, getting ready to visit family in Scotland and Ireland, in the midst of renovating her house on Bass Lake, and dealing with her late husband’s estate. We laughed and talked, ate walnut pecan ice cream, visited a chocolate store, stopped by a wildlife sanctuary and marvelled at the peacocks and swans. What a splendid afternoon, driving in the open air – feeling the balmy wind through my long fur was a delight, as was listening to Kate's stories.  She was quite a gal, and made our whirlwind tour of Coldwater an absolute joy. Bravissima, Kate!

Posted by Krystyna Lagowski at 12:07 PM