Smile when you say "chick car"

Chick cars have been around ever since car manufacturers decided that women were some kind of niche market. It didn’t take consumers long to decide that if a car was marketed to women, there had to be something wrong with it. And voila, a stigma was born. 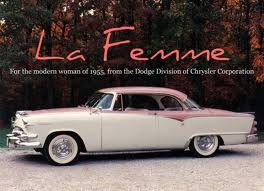 One of the most cockeyed examples of the chick car was the Dodge La Femme, manufactured in 1955 and 1956. It was based on a Chrysler Newport body, but came in two-tone pink and white, with pink gold-flecked cloth inside, and was marketed to “Her Royal Highness, the American Woman.” In all fairness, Dodge DID provide an item that is sadly lacking in automobiles today – a special compartment for a purse. They even provided the purse itself. Although about 1,500 of these cars were built, women somehow managed not to scoop them up.

Then, there was the Citroen Ami 6, launched in 1961 as a vehicle for women: “Pour vous Madame.” Partially because it was based on the venerable 2CV platform, and perhaps the French really are smarter than the rest of us, the Ami 6 became the best selling car in the French market at the time, with over a million sold in 1966. The reverse-raked rear window was quite chic, and the Ami’s seats were - bonus - easily removable. Early sales pitches showed them being used for picnic chairs. 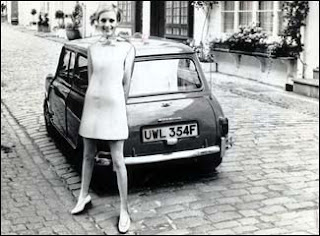 Meanwhile, over in England, a debonair car designer named Alec Issigonis was charged with the task of creating a small, inexpensive vehicle for the British housewife. The diminutive gem he whipped up was called a Mini, and it certainly was. The wheels were a petite eight inches, and the engine was mounted sideways to allow maximum passenger room. One thing led to another, and the British Mini became an icon of the 1960s – no longer just a housewife’s car, but a fashion accessory, a rally car and even a movie star.

These days, the term chick car is bestowed upon cars like the Mazda Miata, pretty much any Volkswagen convertible (the Beetle qualifies with or without a ragtop), the Fiat 500, the erstwhile Saturn, Toyota Yaris – anything that’s small and stylish. Or, perceived to be underpowered. And usually, it’s a guy who’s making the decision about the monicker. In other words, if you’re a manly man, you wouldn’t be caught dead in this car. 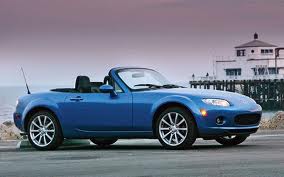 And that’s a shame. Because most so-called chick cars are good-looking, fuel-efficient and affordable vehicles. Isn’t that what today’s consumer is all about? Shouldn’t the term “chick car” be a badge of honour instead of a slur? It should be as highly prized as a Consumers Reports “best buy.”

Perhaps our society will one day be evolved enough to appreciate that cars don’t come with a gender bias. After all, a chick car can’t tell whether it’s a macho man or a girly woman driving, can it?
Posted by Krystyna Lagowski at 2:56 PM