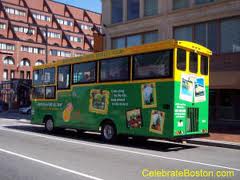 Boston is 60 per cent landfill, and its 50-acre green space, the Boston Common, was the first park in the United States. The hallowed ground of Fenway Park, its baseball stadium, is the oldest Major League baseball stadium still in use. And the term "hooker" originated in Boston, after a general who liked to make sure his soldiers were really looked after.

This and other fascinating facts about Boston are relayed on a daily basis by Ed, the Boston tour bus driver, while he is simultaneously driving and dodging Boston traffic, bicyclists and pedestrians as well as carrying on conversations with the passengers. Boston is not exactly the easiest town for driving, let alone driving a honking big bus, conducting a tour, chatting with passengers and occasionally filling out tour tickets.

There are 21 stops on this tour that traverse Boston’s famously tangled streets, where intersections have no right angles, and traffic lights operate with whimsy. It is a glorious city for walking, as the scenery is picturesque and peppered with quaint buildings. Walkers can take in the country’s first walking tour, the Freedom Trail, and discover 16 historical sites over two or three hours, covering about 150 years of American history. Of course, this is best done in the spring and not in February, when cold and snow can hamper your enjoyment of Americana.

But traffic could be worse. Before the aptly named “Big Dig”, which cost about $22 billion, there was an elevated central artery that was hastily constructed as a way to ease congestion. After all, when Boston was built in the 1700s, the roads were designed for livestock, not four-wheeled vehicles. In the 1960s, plans began for an underground expressway to be built under the elevated highway – while the highway was still in business. Traffic now moves over a bridge and through four underground lanes. It only took four decades.

But back to Ed. He stops the bus abruptly for a jaywalker, and shares his theories on pesky pedestrians. He doesn't think that Boston's one dollar fine for jaywalking is enough, and believes that instead of being ticketed, police should confiscate jaywalkers' shoes for at least an hour. While in police custody, the shoes would be coded – so that at the next offence, police would know to hang on to the shoes for TWO hours.

That’s almost as delicious as the clam chowder at Legal Seafoods.

Posted by Krystyna Lagowski at 2:53 PM