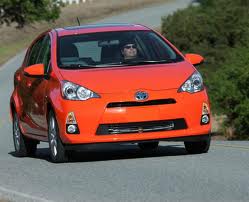 It may be premature to call the 2012 Toyota Prius C the best thing since pre-sliced bagels, but it may just be The Little Car That Could.

For starters, priced at about $20,000.00, it’s the lowest-priced and first truly affordable gas-electric hybrid. Its official mileage in the city is 2.8L/100 K, or 53 mpg to those who still don’t get metric. Since the Honda Civic hybrid lawsuit in the U.S., we’re skittish on official mileage figures, but this seems promising.

Is Toyota the only car-maker who has figured out something that others are missing? There’s a whole generation of car buyers out there who are not exactly in love with the traditional internal combustion engine – they’re not romantically attached to muscle cars or overpowered Italian designer buggies. The charmingly named Generation Y cut their teeth on the three “R’s” – reduce, reuse, recycle. To a lot of them, the internal combustion engine is a planet killer.

For the first time in generations, rites of manhood do not include a driver’s license – but rather, an iPhone. According to a Deloitte LLP survey “the smartphone has replaced the car as the ultimate mobile device.” So Gen Y wants 1. an affordable car 2. that doesn’t pollute and 3. they can plug their phone into.

Enter the Prius C. The base model comes standard with a 3.5 inch information screen, Bluetooth, automatic climate control plus USB and iPod connectivity, features that you don’t usually find in a $20,000 car.

Sold in Japan as the Aqua, Toyota allegedly received about 120,000 orders for it between the December 26 release date and January 31, or about 10 times its monthly sales target.

Not everyone is impressed with the Prius C. It’s been derisively referred to as a hybrid Yaris, underpowered and sluggish, and plasticky inside. Some kvetch that the base model doesn’t come with heated seats. Others complain that it doesn’t look enough like a Prius!

The fact is, the same Deloitte LLP study found that 57 percent of Gen Y prefer a hybrid-gasoline car. There are currently 80 million Gen Y in the U.S. – the biggest consumer group since the Baby Boomers. The Boomers fell in love with horsepower happy cars like Mustangs, Hummers and exotic rocketcars. If the auto industry wants to survive, they better start pandering to Gen Y – they’re going to be the game-changers.
Posted by Krystyna Lagowski at 2:45 PM