When a woman's fancy turns to bicycles 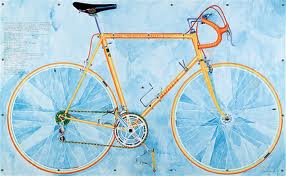 Toronto is stuck solidly in March and yet, it feels like we have already sprung into May. When the temps are this warm and sublime, it’s hard not to think about … bicycling.

As a kid, the first warm day of the year meant freedom - the joy of climbing onto a bicycle and tearing down the street, sucking in great gulps of sweet spring air. In those days, my ride was a baby-blue CCM bicycle that my father had bought me at the Canadian Tire at Queensway and Islington. It sat in the veranda of our house at 34 Morgan Avenue in Etobicoke. Nobody worried about squirreling it away in the garage or locking it up.

It was on that blue CCM that I first tasted the heady independence of mobility, free to go wherever I wanted – as long as I didn’t go past Norseman Street and made it home in time for supper. There was something so magical about riding through the neighbourhood – everything looked, sounded and smelled different from my perch on the bicycle. The dandelions pouted at me with their bright yellow faces, my wheels ground away at the asphalt, and the light, musky smell of young grass tickled my nose.

“Where is the wonder that I used to know?” That’s a line from one of my favourite songs by Dion McGregor and Mike Barr. These days, bicycling is a serious matter that is debated in government halls, not the carefree harbinger of spring of my youth. It’s a controversial subject, not kid stuff. Who has the right of way on the road? Do bicycles belong on sidewalks? What kind of lock works best?

But I don’t care. I’ve been cruising the bicycle shops because the itch is in me. I want to rekindle the deep joy of powering along the road on just two wheels instead of four, riding under my own steam, pedalling by a creek where the flowers are just starting to wake up from a winter slumber.

Today, bikes sure cost a lot more than they used to, but the technology has improved by leaps and bounds. I was tickled to see that there are touring bicycles now for women like me that look a LOT like my old CCM. It was hard not to buy the first one I leapt on, it felt so exhilarating to pedal along Queen Street!

Somewhere, there’s a bicycle with my name on it. And even though it’s been a long time since I lived at 34 Morgan Avenue, I know I’ll still relish the delight, the delicious feeling of abandoning myself to two wheels … instead of four …
Posted by Krystyna Lagowski at 1:31 PM