What's Vladimir Putin made of? 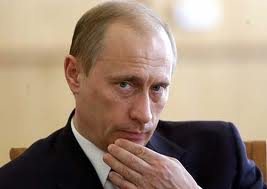 Vladimir Putin may be the most colourful and scary Russian leader since the cold war. The current prime minister and alleged president-elect, Vlad has come under criticism for rigging elections, strafing small post-Soviet republics and even poisoning journalists.

That’s just the tip of the iceberg. A former KGB agent, Putin is a self-styled badass. He’ll tackle forest fires head-on, flying a jet into the flames and beating them into submission. He’s shot a rampaging tiger – and then measured its teeth for good measure.
Is there anything this crazy Russkie won’t do for macho kicks?

Take a look at what Vlad drives. For starters, he took a bright yellow Renault Formula One racecar out for a spin, apparently reaching speeds of up to 240 clicks.

A testosterone-stoked Lada Niva 4 x 4 is his daily driver – Vlad’s has a grille guard, winch and snorkel, for off-roading in Siberia.

In fact, Vlad is such a slamming alpha dog that he drives a Harley trike and hangs out with biker gangs. They’re probably afraid to say “nyet” to the gun-toting black belt karate master.

But sometimes the ride is less than smooth for Russia’s number one son. A Lada Granta sedan refused to co-operate with Vlad in a not-so-carefully staged publicity video. Those Lada engineers were probably sweating with every crank of the key!

Alpha male Vlad is a prime example of “you are what you drive.” The powerful vehicles he chooses to drive match his bare chest for sheer muscle. They’re as much a part of his image as any political rhetoric and campaigning. Vlad’s brawn and cast-iron biceps have to be reflected in everything he does to maintain his cast-iron leadership. You’ll never see this guy in a Yaris.

Too bad.
Posted by Krystyna Lagowski at 8:14 PM