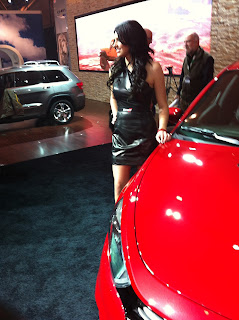 Way back in 1992, when Chrysler introduced the flamboyant Dodge Viper at the Toronto auto show (as it was then called), they had a correspondingly bootylicous Viper Girl. She matched the machine curve for curve, and strutted her blonde buxom stuff all around the Viper podium. It was full-on sex, sizzle and damn the torpedoes.

What fun, I told my friends, with a tinge of jealousy. The only car I could ever hope to represent was my 1973 Dodge Dart Swinger – practical, comfortable, unpretentious and reliable – just like me. If ever there was a casting call for females to schill a sensible vehicle, that would be right up my alley. I could be the Dodge Dart Girl. I was only kinda joking.

Fast forward to the Canadian International Auto Show, 2012. One of the vehicles generating major buzz was the 2013 Dodge Dart. Yes, Chrysler had resurrected the Dart name for its latest model entry, its first compact sedan in seven years, and one that would battle the Ford Focus and Chevy Cruze.

Standing next to the Dart was a curvaceous young lady clad in tight black pleather, tossing her hair, turning this way and that, working her statuesque charms on a phalanx of photographers (see above left). She was no less than … a Dart Girl!

And the new Dart? Hardly my simple, honest and unpretentious model of 1973. It took its styling cues from other resurrected names like Charger and Challenger, and drew more on the muscle variants of the Dart. Which would explain the presence of the shapely Dart Girl, and her multiple “booth babe” counterparts.

I mean, they never even called me for an audition! Well, that’s okay. Would I be comfortable poured into black pleather? More likely, I'd trip over something and do a face plant in the hood. That's the only time anyone would be game to take my photo. And it's pretty unlikely anyone would be buying what I'd be hawking.

But if they ever bring back the Valiant … !
Posted by Krystyna Lagowski at 7:42 PM