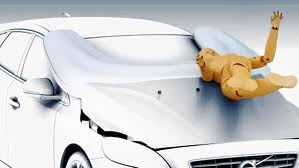 It began back in 1958 when Volvo engineer Nils Bolhin invented the three-way seat belt, which made Volvo the automotive guardian angel of safe driving. In the 1990s, Volvo went airbag-happy, with the big dusty pillows erupting from every automotive orifice imaginable.

Volvo has riffed on its safety brand for decades, and this year, topped itself with the introduction of a pedestrian airbag. When I first spotted this, I was tempted to think – isn’t it early for April Fool's?

The concept is simple – if a pedestrian happens to foolishly wander into the front of your Volvo, SCHLING! An airbag pops up over the windshield and cushions the blow to both pedestrian and vehicle. There’s even a video demonstrating the methodology with a crash test dummy.

The problem here is that this strategy flies in the face of driver legislation as well as driver training, which puts the responsibility for avoiding pedestrian collisions squarely on the driver. Drivers are meant to operate their vehicle to give pedestrians as wide a berth as possible - to expect the unexpected. This is drilled into every student driver all over the planet. Never mind that Volvo also has a pedestrian safety system, which in a recent Australian demo, went horribly wrong.

It begs the question – should pedestrians feel safer if they’re around Volvos? And even more to the point – should drivers feel entitled to slack off if they’re driving a Volvo?

Perhaps this is why “Volvo” has become another word for “bad driver.” Theories and anecdotes abound in all parts of the world about negligent and dangerous Volvo drivers – eerily related to SUV drivers who don’t care about others on the road because in a collision, their vehicle and its occupants will survive. In fact, the image of the bad Volvo driver has become so prevalent that an Australian ad agency created a campaign to combat it.

While Volvo is to be commended for putting safety first, the reality is that too many drivers depend on passive safety technology. In other words, they assume the car is factory-equipped to avoid collisions and this gives them license to be bad drivers. Not true.

So while we have yet to see if pedestrians will be the beneficiaries of Volvo’s latest safety advances, one thing seems likely – the deer of the world finally stand a fighting chance of not becoming roadkill.
Posted by Krystyna Lagowski at 3:25 PM