A woman walks into a bicycle shop ... 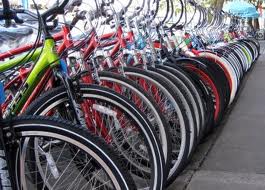 … and asks for a bicycle made for a woman. The kind of bike, she says, that would be good for riding around her neighbourhood, maybe some local trails, something that’s affordable and oh yes, very light. She doesn’t need 76 gears or heavy-duty suspension, won’t be participating in any triathlons or mountain climbing.

So the salesguy checks her out, and brings her a white ladies’ touring bicycle. The cables and fenders are white. It’s whiter than the china at Buckingham Palace. It’s so white, it hurts my eyes.

Yes, I’m the woman in question. Taking the white-on-white bicycle for a spin, I was  nervous – not so much about the belligerent cab driver behind me but getting grease on the pretty white cables. Nah.

Next bike shop, same story. This time I know to ask for a step-through bicycle, and explain that I need something functional, affordable, built for a woman like me. This salesguy nods and brings me a pastel blue bicycle with a wicker basket on the handlebars, which by the way, have curlicues on them. I point at a low-slung grey number which is more my style, and take it out for a spin. Alas, the price point is a bit too high and I trudge on.

At last I find a bike shop with women selling bicycles. Unfortunately, they didn’t have anything in my price range. I tried – I really wanted to buy a bike from them. But I’m a freelance writer and as such, on a permanent austerity plan. It doesn’t help when they tell me I need a lock that would cost exactly a third of what their cheapest bike is selling for!

Finally, I did find the bicycle of my dreams. It’s a pale metallic blue Genesis with seven gears that takes me back to my childhood in a good way. It’s not too girly, not too technical, nice and light and drives like a dream. Bonus – it was on sale! And the cats approve. The straight-talking salesguy reminded me of my veterinarian, who has a somewhat abrupt bedside manner and shoots from the hip. Like my vet, whose main concern is the animal, this guy was focused on the bicycle. “Solid aluminum frame, lightweight, good value for the price,” he said in heavily accented English. I’m not sure where he was from, but the bicycle is from heaven.

It’s going to be a great summer.

Posted by Krystyna Lagowski at 8:36 PM